For Gen Z, crystals embed spirituality in the planet

(RNS) — Leanna Greenaway used to keep her practices with crystals and herbs to herself. “Back when I was in my 20s, I practiced in a solitary fashion because it was still very much a taboo subject,” she explained.

Now Greenaway, the author of the popular 2019 book, “The Crystal Witch: The Magickal Way to Calm and Heal the Body, Mind, and Spirit,” said young people are reaching out to her in droves. “They’re asking questions about the magical properties of crystals and herbs. This wave of young people were born with a higher consciousness. They’re more focused on the well-being of the planet and more sensitive to the earth’s vibrations,” she said.

Greenaway is backed up by recent data from Springtide Research Institute, which surveys tens of thousands of young people ages 13-25 each year about their spirituality. The 2022 study found that 44% engage with crystals or herbs as a spiritual exercise, with one in five (21%) saying they do so on at least a weekly basis.

The people of Gen Z hear about these practices via a slew of independent spiritual teachers who appear on popular social media apps such as TikTok and Instagram, on which 75% of young people said they spend at least three hours a day, according to Springtide’s survey. They also hear about them from an increasing number of celebrities they admire.

Crystals and herbs have been associated throughout history with the supernatural and have long been thought to provide humans with healing, vitality and tranquility. Bright crystals like amethyst and rose quartz are thought to aid in creating relationships, while darker stones such as black tourmaline are said to absorb negative energies and toxicity.

Popular herbs such as rosemary are thought to provide protection, while Panax Ginseng “quiets the spirit, particularly (the soul), helps stop palpitations with anxiety and, where necessary, opens the heart and strengthens the resolve,” according to holistic healer Maura Farragher.

For some young people, experimenting with crystals and herbs is akin to a hobby. As one writer put it in 2019, “the route I’ve taken with my personal collection is something closer to casual curation than prescription.” For others, they meet a spiritual need to feel at home in the universe and connected to the “energies” at work around them.

They often seem to fill a gap where traditional religious beliefs, practices and community might have been, as attendance rates at religious services among Gen Z continue to dwindle.

Blake Newborn, a 22-year-old who lives in Pennsylvania, used to go to church, but now he prefers to find spiritual solace in crystals, tarot and the zodiac. “I would prefer these any day over a religious institution. Sometimes I don’t feel like they’re welcoming to certain groups of people,” he adds. Though Newborn identifies as an atheist, he acknowledges the universe as a higher power who accepts him. “My identities clash with the Bible, but not the universe. The universe created you and accepts you for who you are.”

The last time Newborn went to church, he said, “I didn’t feel welcome. There was something inside of me that was like, ‘You don’t really fit in here.’ It may have been that the energies were off with mine.”

When I talked to Newborn, he was wearing a crystal bracelet with a tiger’s eye stone that he believes provides strength. Newborn’s astrology sign is a Leo, and his Zodiac sign is a tiger, bringing the choice of bracelet full-circle. He also had a salt lamp to cleanse the energy of his bedroom, combat negativity, give him a sense of focus and promote calm.

Newborn’s use of crystals has brought him closer to his aunt, who, though she actively attends church, started practicing with crystals as well. “She feels more connected to that spirituality, and she will talk about it with me, and we will really vibe with one another,” Newborn said.

As Greenaway’s experience attests, New Age spiritual practices were once isolating and individualistic, but with growing numbers of young people engaging in these practices, community has formed around them of late. “Literally everyone I know looks at their Zodiac signs, goes to Tarot card readings and has some type of crystal,” said Newborn, adding, “only a couple of people I know go to church.”

Among faith groups, crystals and herbs are most popular among Orthodox Christians (73%), by those who don’t define their religion by traditional categories (65%) and by Latter-day Saints (64%). 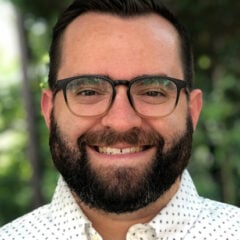 (Kevin Singer (@kevinsinger0) is head of media and public relations at Springtide Research Institute. The views expressed in this commentary do not necessarily reflect those of Religion News Service.)

Buying Starbucks with gold? A Halal investing app is making it possible.

Is ‘Jewish supremacy’ translating into anti-Christian violence in…