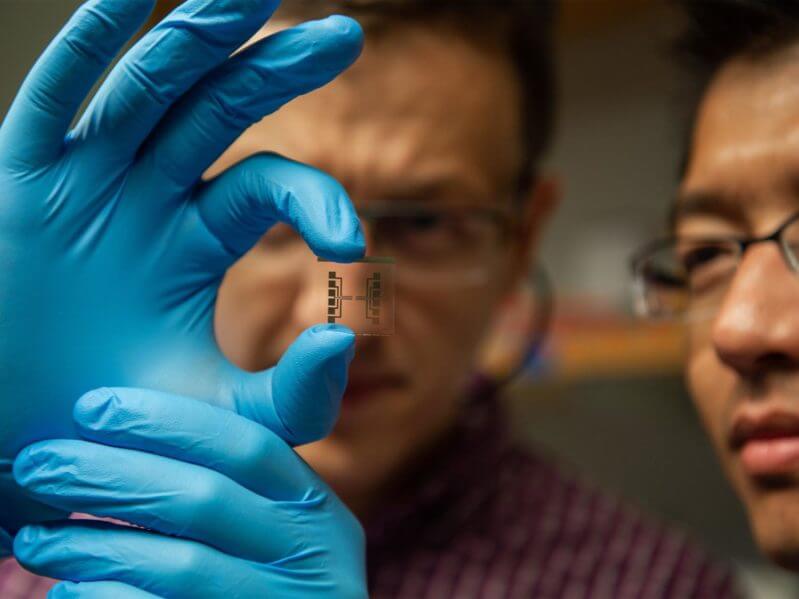 Environmental sensors are a step closer to simultaneously sniffing out multiple gases that could indicate disease or pollution, thanks to a Penn State collaboration. Huanyu “Larry” Cheng, assistant professor of engineering science and mechanics in the College of Engineering, and Lauren Zarzar, assistant professor of chemistry in Eberly College of Science, and their teams combined laser writing and responsive sensor technologies to fabricate the first highly customizable microscale gas sensing devices.

They published their technique this month in Applied Materials & Interfaces, a journal of the American Chemical Society.

“The detection of gases is of critical importance to various fields, including pollution monitoring, public safety assurance and personal health care,” Cheng said. “To fill these needs, sensing devices must be small, lightweight, inexpensive and easy to use and apply to various environments and substrates, such as clothing or piping.”

According to Cheng, the challenge is creating devices with the desired properties that still can be tailored with the infrastructure needed for precise and accurate sensing of different target gases at the same time. That’s where Zarzar’s expertise with laser writing comes in.

“Laser writing techniques give design freedom to a wide range of fields,” Zarzar said. “Expanding our understanding of how to directly synthesize, pattern and integrate new materials — especially nanomaterials and nanomaterial composites — into complex systems will allow us to create increasingly more sophisticated and useful sensing technologies.”

Her research group developed the laser-induced thermal voxel process, which enables the simultaneous creation and integration of metal oxides directly into sensor platforms. Metal oxides are materials that react to various compounds, triggering the sensing mechanism. With laser writing, the researchers dissolve metal salts in water, then focus the laser into the solution. The high temperature decomposes the solution, leaving behind metal oxide nanoparticles that can be sintered onto the sensor platform.

The process streamlines previous methods, which required a pre-defined mask of the planned pattern. Any changes or adjustments required the creation of a new mask — costing time and money. Laser writing is “maskless,” according to Zarzar, and, when combined with the thermal voxel process, it allows for the rapid iteration and testing of multiple designs or materials to find the most effective combinations.

“Precise patterning is also a necessary component for the creation of ‘electronic noses,’ or arrays of sensors that act like a nose and can precisely detect multiple gases at the same time,” said Alexander Castonguay, graduate student in chemistry and co-first author on the paper. “Such precise detection requires the patterning of different materials in close proximity, at the thinnest microscale. Few patterning techniques have the resolution to do this, but the approach detailed in this study does. We plan to use the techniques and materials described here to develop electronic nose prototypes.”

The researchers tested five different metals and metal combinations  currently used in sensors. According to Castonguay, the point where different metal oxides touch, called a heterojunction, cultivates a unique environment at the interface of the two materials that enhances the response of gas sensors. The team found that a heterojunction of copper oxide and zinc oxide has a five to 20-fold enhanced response to the tested gases — ethanol, acetone, nitrogen dioxide, ammonia and hydrogen sulfide — over just copper oxide.

“This finding supports other reports in the scientific literature that the creation of mixed oxide systems can lead to significant increases in sensor response and demonstrates the efficacy of the laser-induced thermal voxel technique for mixed-oxide gas sensor fabrication,” Castonguay said. “We hope by pooling the laser writing knowledge of the Zarzar group with the wearable sensor expertise of the Cheng group, we will be able to expand our capabilities to create novel, customizable sensors.”