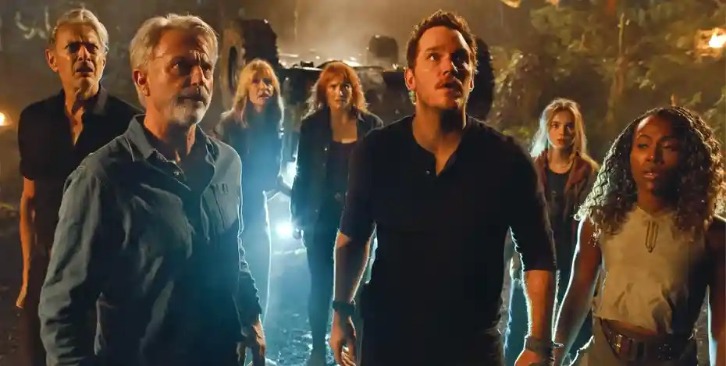 Whatever the reasons that saw Colin Trevverow fired from The Rise of Skywalker, we can be sure that on the basis of Jurassic World Dominion, a film that’s billed as the finale in the Jurassic Park/World series that begun with Steven Spielberg’s masterpiece, it’s in all likelihood that his version would have been at least as bad, if not worse, than the one that we got. Dominion is just all over the place – a missed opportunity that fails to understand what made the franchise so special in the first place; and ensures that if this is the last Jurassic entry, the franchise goes out with a whimper rather than a bang. 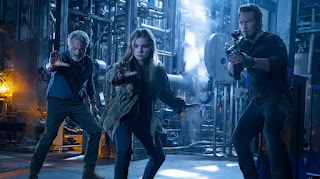 It becomes apparent even well before the final act that there are too many characters. There’s too much story. What worked about Jurassic Park was how simple it was; how small the core group of characters was. Instead, with the lumbering need to connect the Park and World franchise characters together through a threadbare narrative whilst introducing new cast members, Dominion almost feels too crowded – there have been multi seasons of television shows that have ran for four and more years with a smaller ensemble of regular characters, and it means that Dominion has very little time to juggle them all. It doesn’t help that the two leads it’s stuck with, Chris Pratt’s Owen Grady and Bryce Dallas Howard’s Claire Dearing, are the two most uninteresting leads to lead a franchise of this magnitude, and that’s shown by the fact that literally everyone, even Omar Sy, returning for the best part of the film – an extended-chase sequence through Malta, play characters that are far more interesting than they are. There’s no personality to Owen or Claire and there’s even less chemistry between them.

Laura Dern, Jeff Goldblum and Sam Neill shouldn’t have been dragged back into this mess because Dominion doesn’t find a way to do anything new with them but at least they got paid for it. It’s the same routine as the original trilogy, only worse – and it feels like they’re largely only inserted as cheap nostalgia bait riffs on the first film. It doesn’t help like they’re given cheesy, forced lines that feel like they were written by an AI – by the time Laura Dern mentions that she “slid into his DMs”, you’re laughing at the film, rather than with it. It all adds up to just a colossal wasted opportunity in the sense of promise filled by Fallen Kingdom, dinosaurs unleashed onto the world – but instead Dominion decides to reduce the ending of that film and make it have as small an impact as possible, whereas Dawn of the Planet of the Apes did the exact opposite, scaling back the narrative to the point where it almost feels like a course correction on Fallen Kingdom, in the same way that The Rise of Skywalker attempted to be, and failed, for The Last Jedi. Whilst Fallen Kingdom is no The Last Jedi, Dominion feels like Trevorrow telling his own version of The Rise of Skywalker, a safe, risk-free affair that feels designed to appeal to everybody whilst at the same time, appealing to nobody. 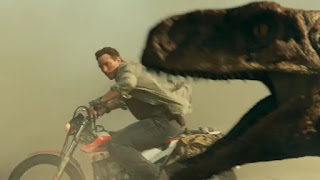 Omar Sy feels massively underutilised in this film – newcomers DeWanda Wise and Mamoudou Athie make more of an impression. Campbell Scott plays Kayla Watts as a cross between Jeff Bezos and Elon Musk; but his arc as a villain is so unsubtle and underdeveloped he feels just as forgettable as the last Jurassic Park villain (and you’ll probably have to Google their name), but you know what’s going to happen to him before you meet him so there’s no real surprise when it eventually does.

The Malta set-piece is the shining highlight of Jurassic World Dominion, a thrilling espionage sequence where the film reminds you of what this franchise could accomplish, but set-pieces like that are few and far between, and Dominion lacks the heart, soul, imagination and sense of wonder that came with the first Spielberg film and even the inventive visuals of Fallen Kingdom to make it worth the admission fee, giving us truly one of the blandest blockbusters in recent memory. Save your money and just watch Top Gun: Maverick again.