The rumored Xiaomi 12S which was previously spotted with Leica branding in a hands-on image as well as in a 3C certification has now made its way to Geekbench. It boasts the same 2206123SC model number as the 3C listing. Geekebench reveals the phone is packing the Snapdragon 8+ Gen 1 chipset alongside 12GB RAM. The software side is covered by Android 12, presumably with MIUI 13 on top. 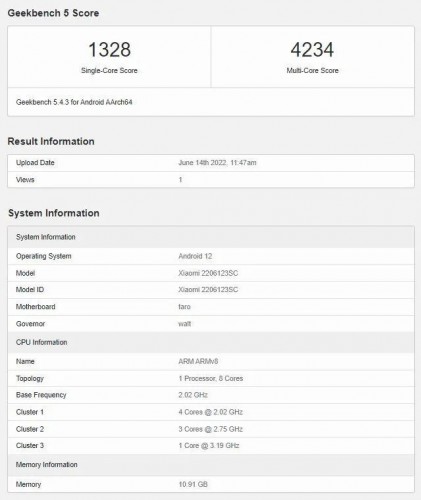 Armed with the SD 8+ Gen 1 and 12GB RAM, the 12S managed 1,328 single-core points and a 4,234 multi-core score. The 3C listing from earlier this month revealed the device also comes with 67W fast charging. The 12S is rumored to bring a 120Hz OLED display and a 50MP main cam co-engineered with Leica. It will be joined by a Xiaomi 12S Pro model which will arrive in two chipset options – a Snapdragon 8+ Gen 1 and a Dimensity 9000.

Google Store, Hotels, Flights and other services will show more accurate info in the…