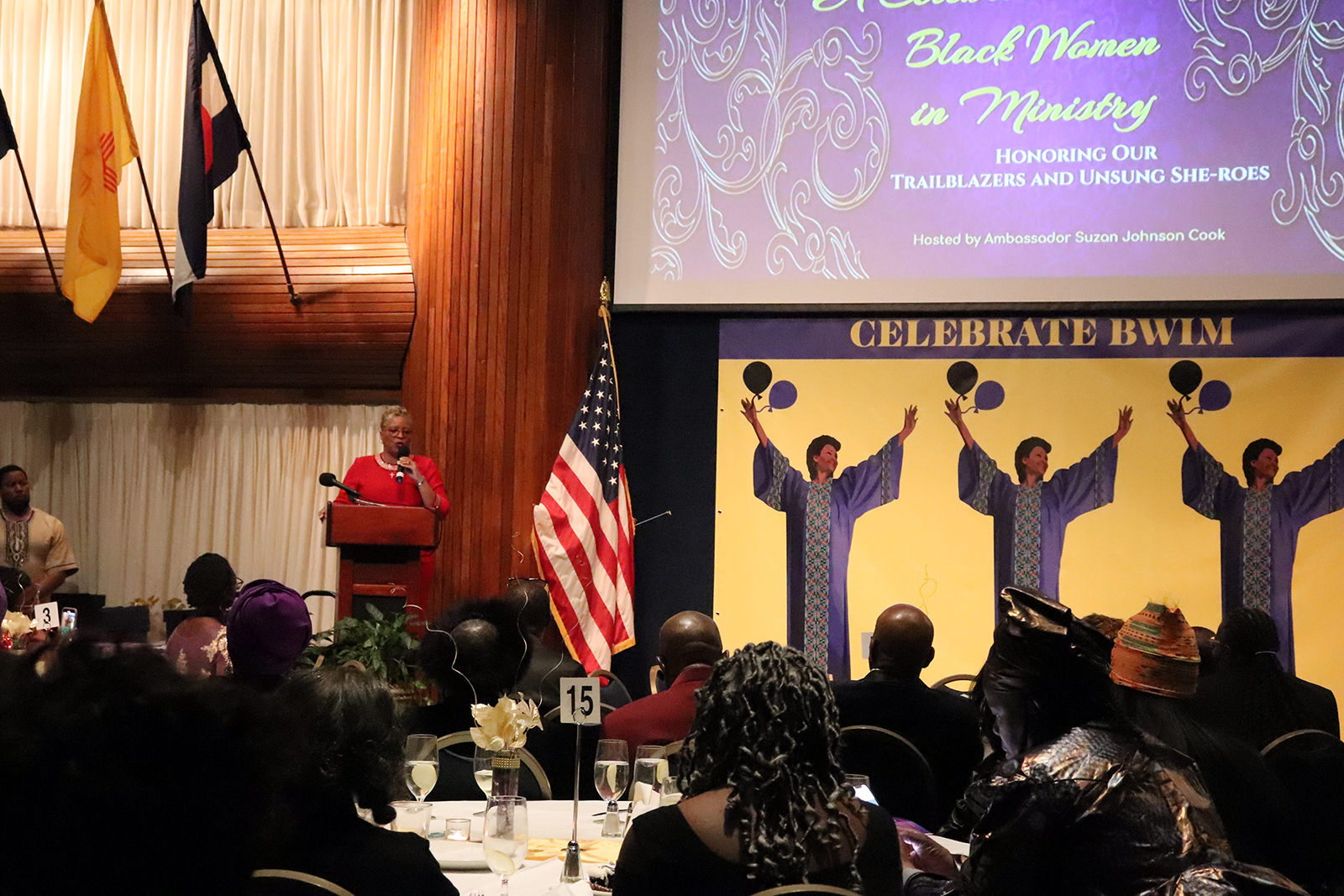 The Rev. Gina Stewart speaks during a Black Women in Ministry event at the National Press Club, Dec. 2, 2022, in Washington. RNS photo by Adelle M. Banks

WASHINGTON (RNS) — In a ballroom in the nation’s capital, with many dressed in gowns and heels, Black women were hailed for the work they do in ministry, known and unknown.

The Friday (Dec. 2) evening gala at the National Press Club marked a continuing effort to provide Black women ministers with affirmation and acclamation through a program that pairs five dozen women in mentee-mentor duos. The initiative’s R.E.A.L. acronym stands for relationship building, equipping and expanding, access and leadership and legacy development.

The Rev. Gina Stewart, who became in 2021 the first woman president of a U.S. Black Baptist organization, said in a keynote speech that the initiative and the dinner showed the work of Black women in ministry had not gone completely unnoticed.

“It’s not difficult to be in a body suit like this and be overlooked, despite your gifts, despite your commitment, despite your anointing, despite your years of service, despite the fact that you show up when others don’t,“ said Stewart, president of the Lott Carey Baptist Foreign Mission Society, who was recognized as a trailblazer during the gala.

“Sexism, misogyny and patriarchy are deeply embedded not just in the church, but in the culture and in society. But tonight, Ambassador Cook and the R.E.A.L. Black Women in Ministry send to us a resounding affirmation that God sees us.”

The Lilly Endowment has given two grants, a $1 million initial grant in 2019 and a $500,000 sustaining grant in 2022, to support the initiative that is linked to Harlem’s Union Baptist Church, where Johnson Cook — who later became the U.S. international religious freedom ambassador — was ordained 40 years ago. Christian leaders are invited to the stage to be recognized during a Black Women in Ministry event at the National Press Club, Dec. 2, 2022, in Washington. RNS photo by Adelle M. Banks

The Rev. Brian D. Scott, the church’s current pastor and the co-leader of the initiative, said at the event that he viewed the women in the room as the people who can lead the church into the future.

“I pray that God uses you to do what the elders say: ‘This little light of mine, I’m gonna let it shine,’” Scott said. “Would you go back and take a spark from this and build a fire when you get back home?”

Throughout the event, the women were encouraged through speeches, song lyrics and poetry.

Accompanied by the recitation of Maya Angelou’s poem “Still I Rise,” the faces of two dozen women flashed across the screen and were praised as trailblazers and “unsung she-roes.”

The women were noted for being senior pastors, ministry leaders, music and dance officials, business people and community servants who have been responsible for pop-up COVID-19 vaccination clinics at churches or food distribution to the needy.

The Rev. Caretha Crawford, an honoree, mentor and pastor of Gateway to Wholeness Church Ministries in Largo, Maryland, said her involvement in the initiative was a sign that “the Lord is smiling on me” after more than 30 years of ministry. 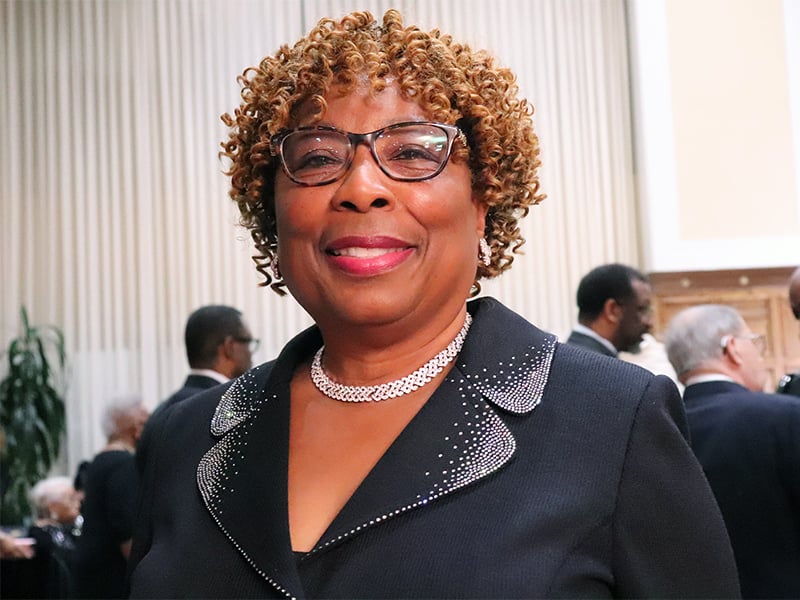 The Rev. Caretha Crawford at a Black Women in Ministry event at the National Press Club, Dec. 2, 2022, in Washington. RNS photo by Adelle M. Banks

In an interview before the banquet got underway, she said the program has allowed Black women like her “just to know that somebody is seeing and recognizing what you’re doing and taking some of the load and the burden off of you. Because ministry can be very burdensome.”

The Rev. Ammie L. Davis, who was installed early this year as president-dean of Turner Theological Seminary, the African Methodist Episcopal institution that is part of the Interdenominational Theological Center in Atlanta, was another honoree.

She said the occasion started her on a new road of networking among female Black ministers, which often occurs informally but is formalized through Johnson Cook’s initiative. In an interview as she arrived, Davis noted that though she is a trailblazer as the first woman president of her seminary since its founding in 1894, she was an admirer of others who had gone before her, including Stewart.

“It’s a unique opportunity to be recognized as a trailblazer when you see yourself more as an ambassador and servant of God,” said Davis, who said she’s excited about becoming more effective as a mentee as well as a mentor. “I’m the novice that’s at the table.” 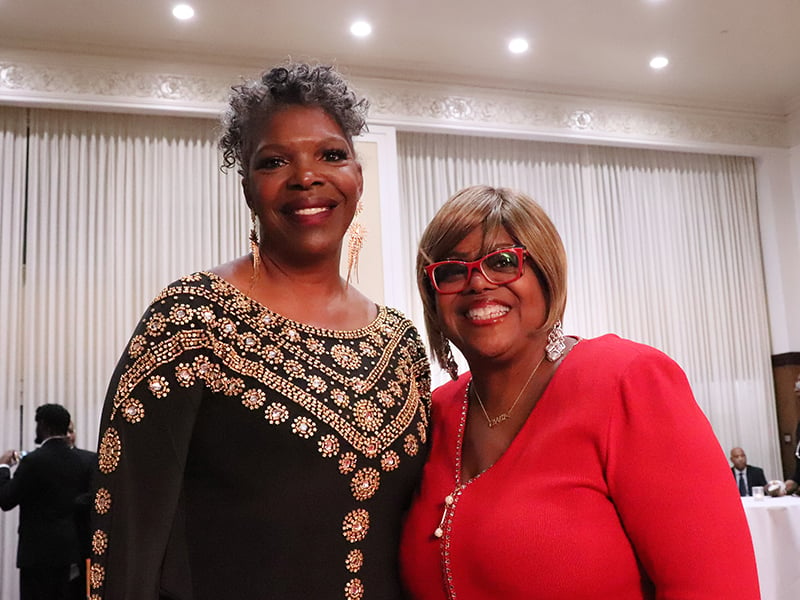 The Rev. Ammie L. Davis, left, and the Rev. Suzan Johnson Cook pose together at a Black Women in Ministry event at the National Press Club, Dec. 2, 2022, in Washington. RNS photo by Adelle M. Banks

The event also focused on women who are not in top roles but who nevertheless serve in ministry in ways they feel called to pursue.

“If I had a dollar for every time somebody asked me, ‘When are you going to get your own church?’” said the Rev. Gloria Miller Perrin, who has served the last 20 years as an associate pastor of First Baptist Church of Glenarden in Maryland. “But I knew what God had called me to do. And I am so glad that I have followed the Lord’s direction in my life.”

Johnson Cook pointed out another honoree and mentor, Pastor Carla Stokes, who had worked out of the limelight developing The King’s Table outreach ministry at New Birth Missionary Baptist Church in the Atlanta area. The ministry recently served its 1 millionth person. But Stokes also led the megachurch after the death of Bishop Eddie Long and before the arrival of Rev. Jamal Bryant.

“We didn’t see in the headlines that there was a Black woman, Dr. Carla Stokes, who was the interim pastor for that congregation, keeping those 20,000 members together — teaching, preaching, Bible study,” she said.

Stokes, when she came to the stage, said the event had inspired her to do more. 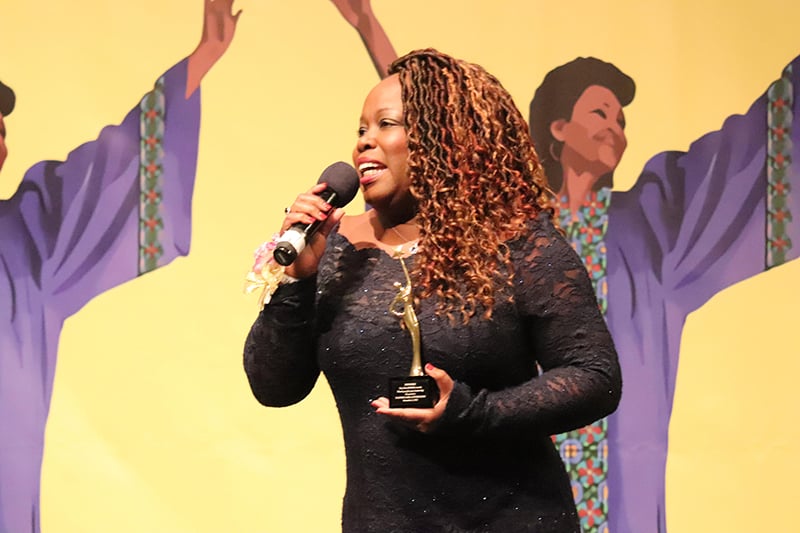 “I grew up in a church that didn’t acknowledge women as ministers. I grew up only being able to stand on the floor and not on the pulpit. I grew up teaching Sunday school but never in a pulpit,” she said. “But I came to tell you when God calls your name, you got to answer and do what he says.”

Another honoree, the Rev. Ayanna Mishoe-Brooker, associate pastor of a Baptist church in Dover, New Jersey, acknowledged her husband, the church’s pastor, who welcomes her as a co-leader.

Though more than 20 took the stage, one of the honorees, the Rev. Sheila McKeithen, senior minister of the Universal Centre of Truth for Better Living, a New Thought congregation in Kingston, Jamaica, made a point of honoring those who were not there.

“For the women whose names won’t be called: They’re laboring. They’re doing the work. They’re not getting an award,” said McKeithen, one of several honorees ministering internationally. “But tonight, I call your name. I call your spirit.” The Rev. Suzan Johnson Cook, left, speaks next to the Rev. Sheila McKeithen during a Black Women in Ministry event at the National Press Club, Dec. 2, 2022, in Washington. RNS photo by Adelle M. Banks

At the conclusion of the event, Johnson Cook’s own name was called unexpectedly. Deborah Martin, dean of students at Virginia Union University, a historically Black institution in Richmond, announced that its new continuing educational center for women in ministry would be named after Johnson Cook.

The former ambassador knew the center, a partnership with the BWIM initiative, would be announced but not that it would include her name.

A surprised Johnson Cook said after the event that the center is expected to open next year.

“It really means that for generations, not only my name but the work of Black women in ministry will be able to carry on,” she said.

The church must admit its role in destroying Native American culture

‘He Gets Us’ organizers hope to spend $1 billion to promote Jesus. Will…