What were merely whispers about a possible recession just weeks ago have started to become louder and, in some instances, full-throated concerns. It’s no wonder when zooming out to look at the big picture state of global economics, which trickles down to the U.S. residential real estate market.

Inflation is seemingly beyond the control of the Federal Reserve at this point, who’s only recourse has been steady interest rate increases. A lever that may have been pulled too late, according to some experts. This, in turn, has also sent mortgage rates surging past the 5% mark. Coming into this year, affordability was already on the minds of many, and the rapid increase in mortgage rates only exacerbates this issue in the short term. To be sure, buyer demand hasn’t cooled off all that much and the ongoing lack of inventory is not only frustrating real estate professionals and buyers but also slowing the raw number of transactions.

When combining all this, it’s of very little surprise that RISMedia’s Broker Confidence Index, which polls more than 3,000 of the nation’s top brokers, saw a somewhat sharp month-over-month decline in its score, from a 7.2 in May to a 6.7 in June. This one-month 50 basis point decline comes after confidence had ticked up slightly in May, during the peak of the traditionally hot spring market.

“We got hit with the trifecta that is not good for sellers—rising rates, inflation and buyer fatigue, which has slowed down the market,” said Scott MacDonald, broker/owner at RE/MAX Gateway in Chantilly, Virgina. 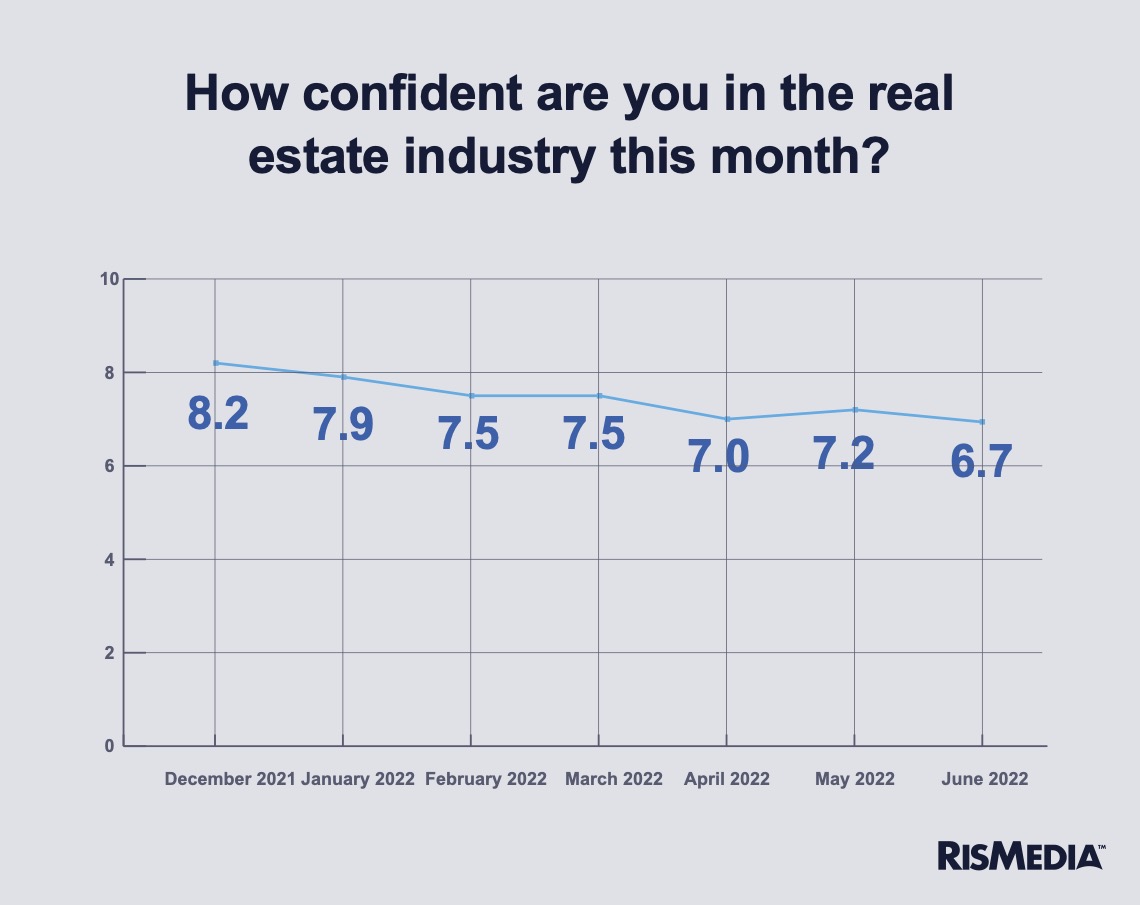 At the close of last year, broker confidence was a strong 8.2, so in just a matter of six months, our respondents shifted their outlook from very to almost extremely confident to now fairly confident as they begin the third quarter of 2022.

In addition to asking about overall confidence, RISMedia drilled down to understand the “why” behind the index score, and the devil is certainly in the details.

Compared to last year, more than half (53.7%) of our respondents said their transactions were down in Q2 versus the same period last year. Still, nearly one-third (31.2%) did see an increase. Volume, on the other hand, had almost the exact opposite numbers. Half of the respondents said their volume was up during Q2, while 30% indicated it was down. This is, of course, due to continued inventory shortages that are driving up prices coupled with general price appreciation on all homes across the country. 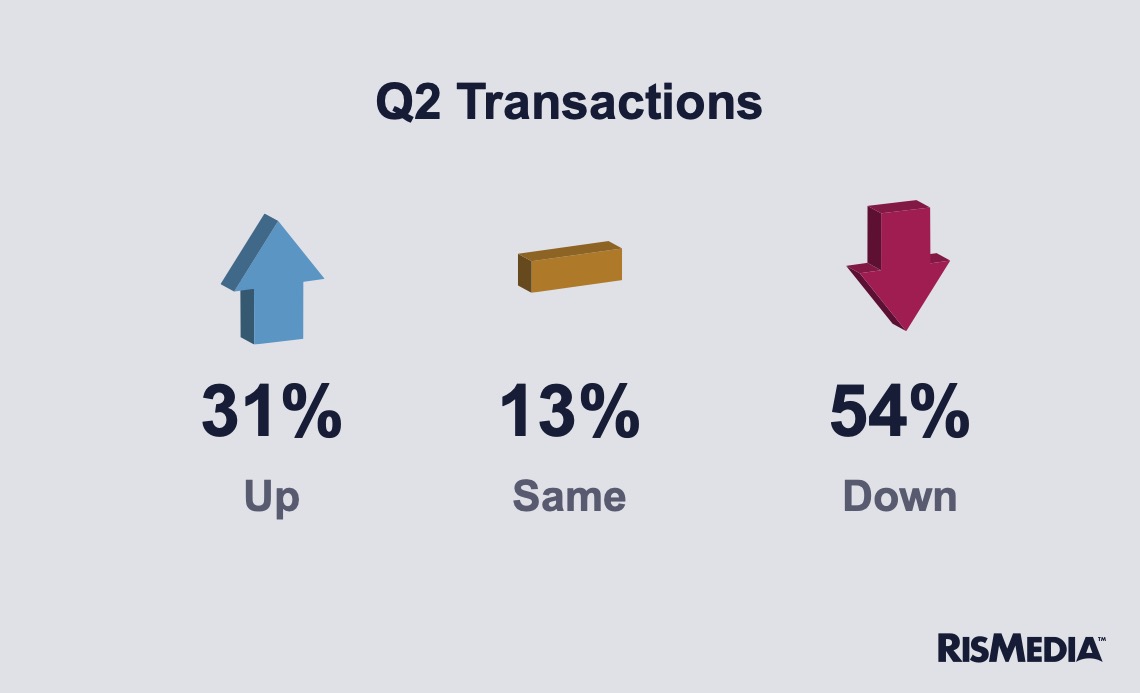 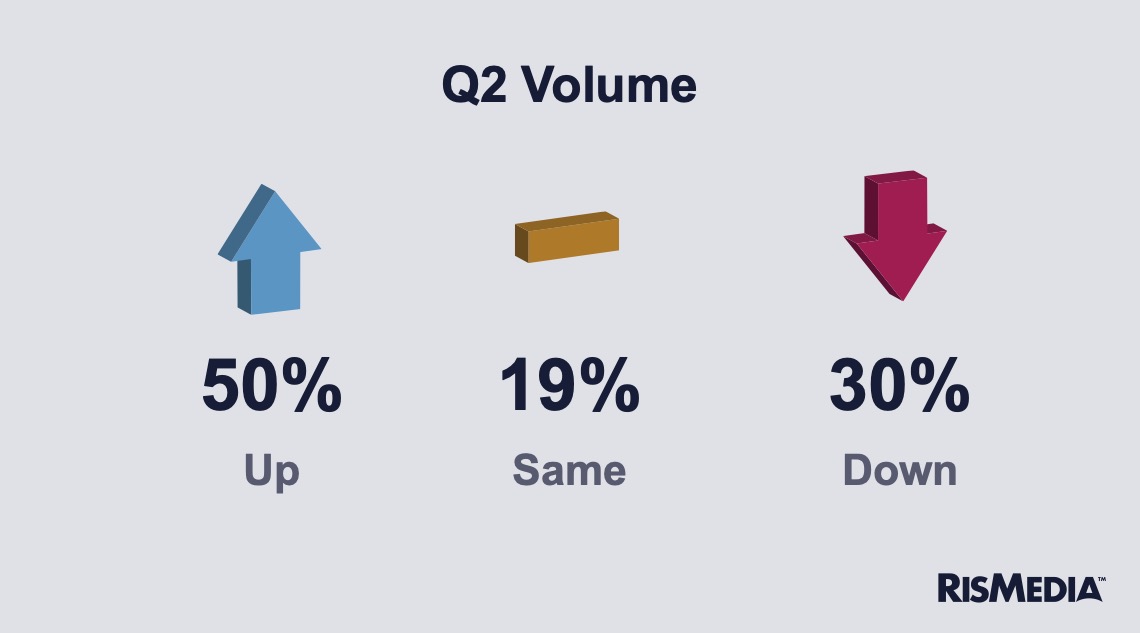 Also troubling is the outlook brokers have for Q3. More than two-thirds (67.5%) expect fewer transactions during this quarter. And a similar number (61.2%) expect volume to also fall versus the same period last year. This signals that brokers do not expect a dearth of new inventory to hit the market to such a degree that sales volume will not make up the difference, which was not the case in Q2. 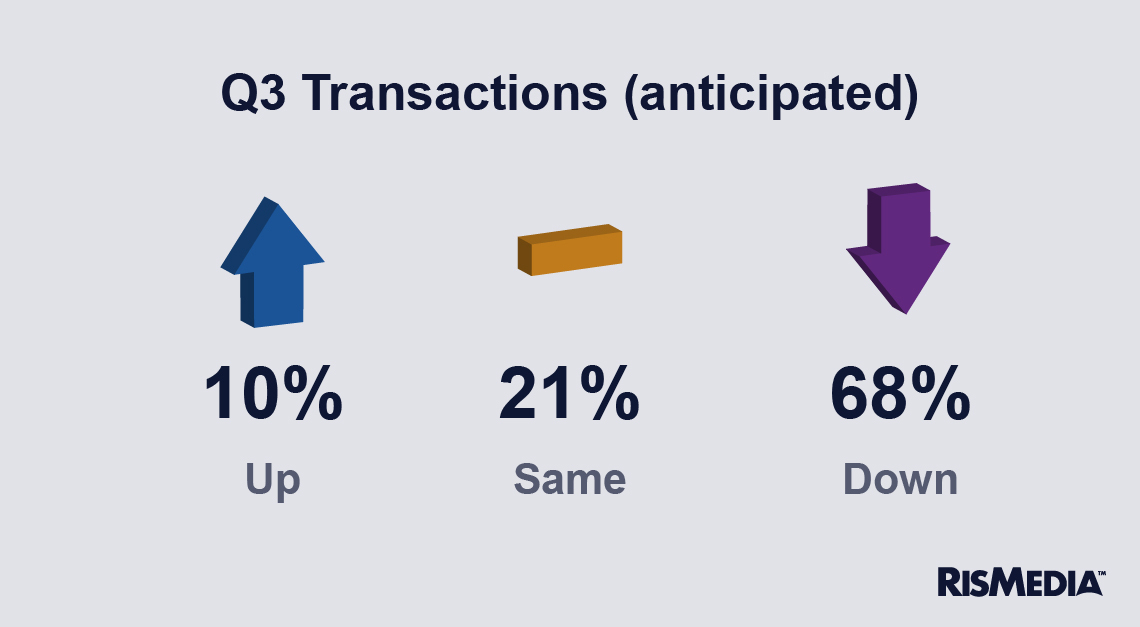 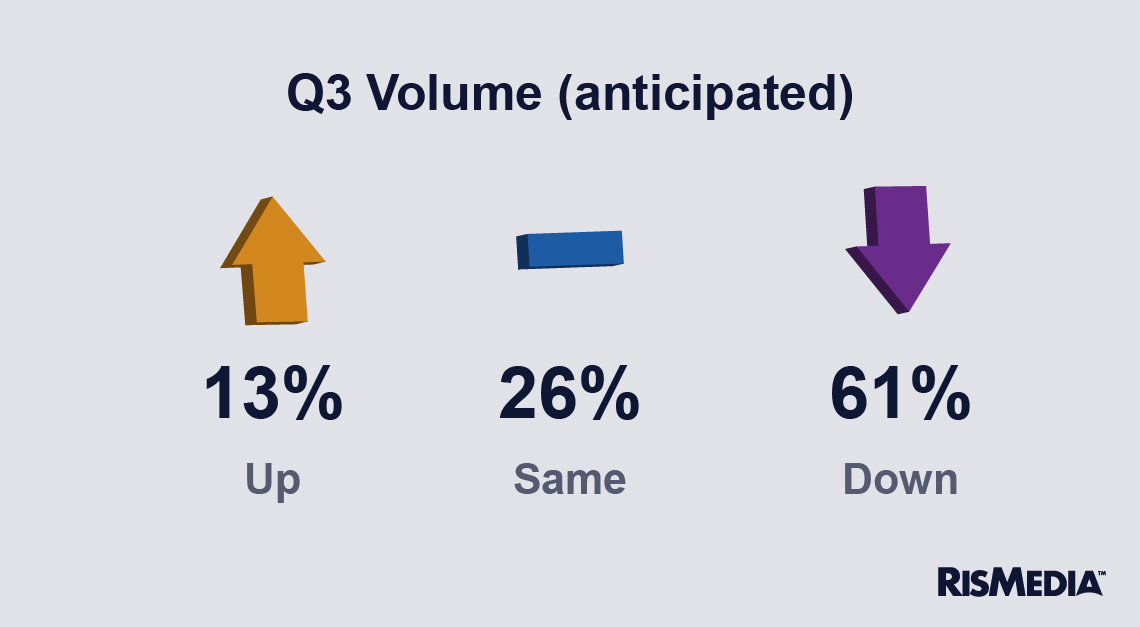 Nevertheless, the number that should really make people nervous is that when asked if we are headed for a recession, 68.7% of brokers said yes, and only 5% said no. Such a notion was unthinkable just months ago after coming off one of the strongest years in residential real estate in recent history. 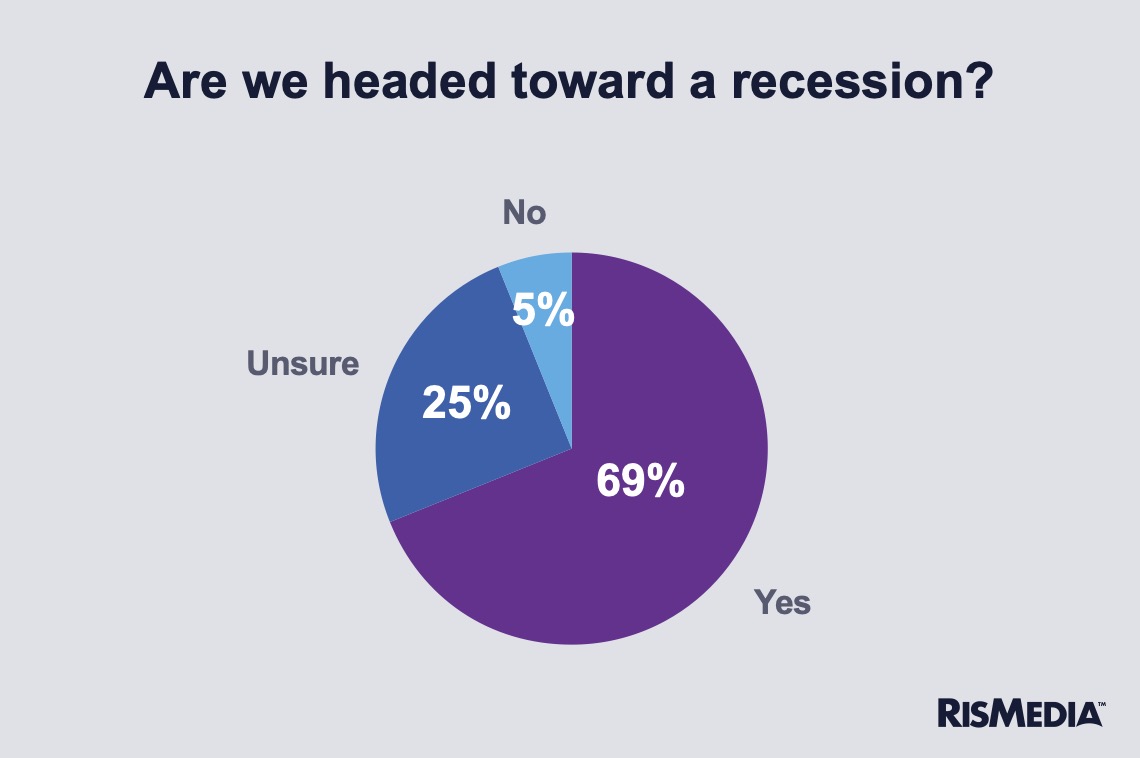 “We feel the nervousness of the markets and we think the economy is heading towards stagflation,” said Fred Hintenberger, of Charles Rutenberg Realty in Clearwater, Florida. “Our base case is a 20% correction in the housing market over the next 18 months.”

Even though we haven’t experienced a sustained period of stalled or negative growth, Harold Crye, of Crye-Leike Real Estate Services, which serves Tennessee, Arkansas, Mississippi, Alabama, Georgia, Florida and Kentucky, is clear in his economic assessment. “ serious concern about higher interest rates and slowing sales. I think we are already in a recession.”

When this study was launched in December, we indicated that over time the data collected could forecast what to expect in the weeks and months ahead. We admittedly didn’t expect to see such drastic movement so quickly. But given how many headwinds have been thrust upon the industry in such a short period of time, it’s clear why we are seeing brokers’ sentiments shifting so quickly. While nothing is certain one way or the other, our data show that real estate professionals should fasten their seatbelts for what could be a bumpy road ahead.