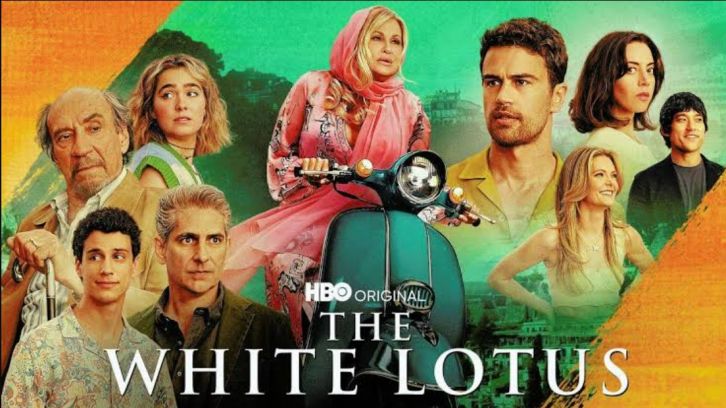 This episode comes to you with the news that The White Lotus, once a standalone show, has been renewed for season 3. Will I be watching? Maybe. Will I be reviewing? Probably not. However, now that my expectations have been tampered down, I’m enjoying the show for what it’s become, but remembering the delightfully smart satire that was season 1 makes one wish the people in charge will maybe take a tep back and reconsider what makes a show not just good, but worthy, before they start writing season 3.

Anyway, back to Taormina and our assortment of unhappy rich people, if last week’s episode’s focus was adultery, this week’s is downright horny. Nothing else seems to exist, aside from ever changing dynamics all leading to own thing. Since Cameron didn’t have enough Cash to give Lucia and Mia, they set off to find new plans, which include sleeping with the piano guy and giving him drugs. Lucia sets her sights on Albie, made vulnerable by Portia’s disappearing act. Albie still wants Portia though, as he keeps glancing in her direction and making sure he sees him making out with Lucia. Portia succumbs to Hot Pool Guy (aka, Jack), which only highlights how meh she actually was about Albie, and how disposable she considers him. Jack’s entourage is entirely comprised of gay men who grab his (fancy) boxers and attempt to set up Tanya with someone who’ll make her forget Greg. Greg is off having an affair (not in Denver though, I’d wager). It goes on and on and on, and while the Portia/Albie bar showdown was quite fun (despite Lucia’s statement, I do think Portia wins in this case, since Jack isn’t a prostitute), I wish the storylines had more substance to them, or at least were more diverse. The gift that keeps on giving, however, is Portia’s sartorial choices. Every week, and often several times during a single episode, the stuff she puts together and goes out in is just out of this world. Quite literally. What the hell was that cropped, puffy jacket (those words wouldn’t even be in the same sentence) if not fit for another planet’s fashion? And why did she just wear sleeves on top of a bikini top afterwards?! I’ll admit the little dino necklace was adorable though, and I’m going to need one now. What will it go with, do you ask? I have no idea, but still, I must have it.

Dominic tries to do something nice for his wife by buying her jewellry and sticking to sad porn in his hotel room instead of live distractions, but his attempts are still shot down by holier than thou Albie. I do wonder what’ll happen now that Dominic and Bert saw Albie and Lucia getting close (also, that scene when Bert opened his very own hotel room door only to see Mia mid dressing was wild, I’m not sure how they get away with it, but they do), but chances are, it won’t (as many things are wont to do in this show) end well. Mia and Lucia have inserted themselves in basically all the guests’ storylines minus Tanya’s (although does it count through Portia, by proxy?) and I worry that they’ll be the collateral damage at the end, since it’s much easier to blame people you’ll never see again for all your issues, rather than face them head on. These two are really growing on me though, and their dreams are simple: open a boutique, become a singer, stop chasing rich men around the hotel in order to survive. Prayer circle for Giuseppe, but since his demise happened in broad… limelight, it isn’t likely he’s the one found in the water at the end of the week. 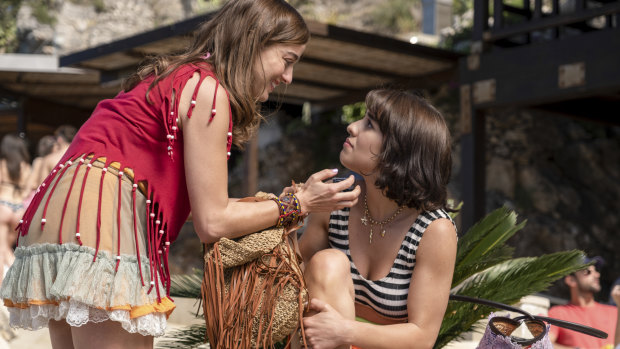 Things are starting to unravel at the seams for the two not so golden couples (and were Cameron’s cash issues and insistance with Ethan sign of a bigger problem, as the online rumors have been saying?): Harper gets back from the Noto expedition only to find an opened condom wrapper on the hotel room’s couch. She never confronts Ethan, instead repeatedly asking what happened in her absence, and finally leaving the wrapper on the bathroom counter. Now, I know that miscommunication is the basis of many dramedies but here it just feels stale. JUST ASK HIM ABOUT THE WRAPPER, HARPER. The truth is at least a little better than what you’re imagining! Ethan didn’t actually cheat, despite the weird vibes when Cameron joined him on the bed. It must especially sting for Harper though, since seconds before finding what she thinks is evidence, she was gloating about how Cameron cheats on Daphne and that their bright and bubbly façade was just that: all for show. Sadly, that façade holds up better than Harper and Ethan’s already fractured relationship that seems to be holding by a thread (of brightly colored, beach-themed, fabric). 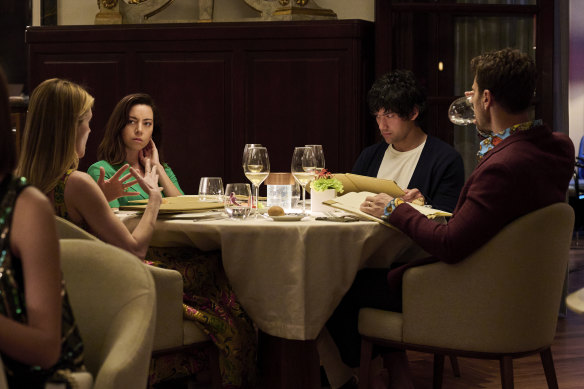 On a lighter note, Valentina continues to be a delight. After lunching with kittens (what’s next, being dressed by birds?), she keeps awkwardly flirting with Isabella and buying her startshell-shaped broaches. If I can give her a small piece of advice though: the resort business might just not be for her, if her way of adressing guests is anything to go by. I naively thought the whole “fly through Berlin” thing was the worst she could come up with, but suggesting Dominic just google jewellry shops and walk around has definitely topped that. What’s next, her telling them to make their own beds?! The things these poor millionnaires have to go through, really.

All in all, I enjoyed this episode more than the last two, and hopefully the rest of the season will deliver more chaos. As usual, share your thoughts in the comments!

Christine and the Queens to Curate London’s Meltdown Festival 2023